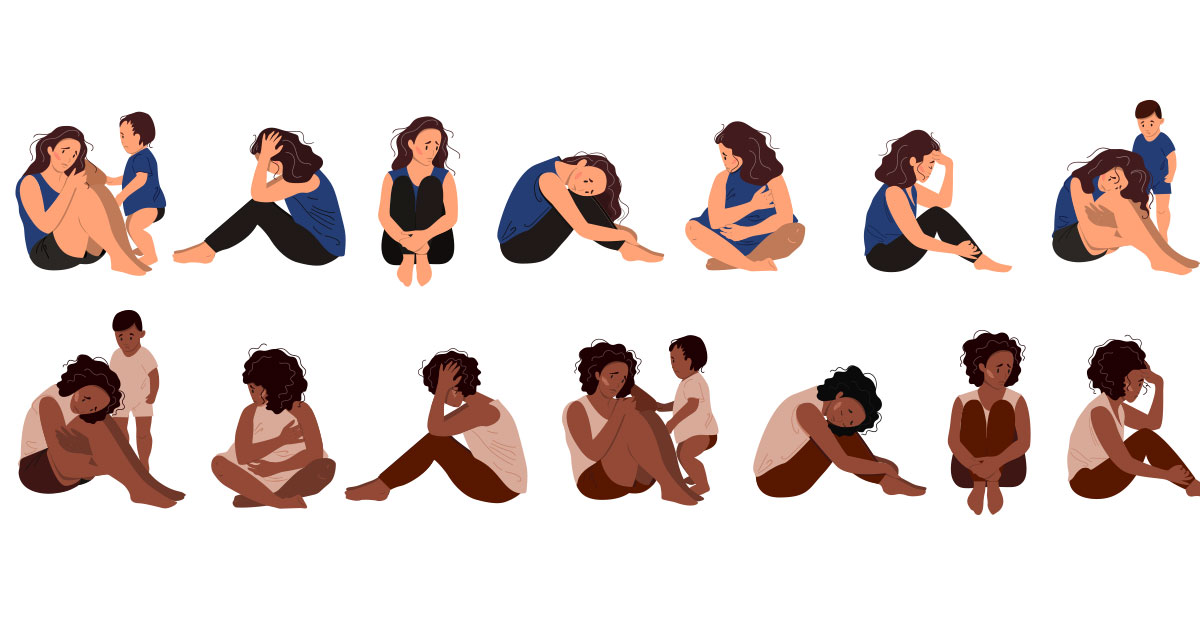 It’s normal to feel sad or unmotivated sometimes but when the feelings linger for a long period, it might be a sign of depression. Many people always mistake depression for unhappiness or slight mood swings. But depression is more severe and complicated than that.

Depression is a type of mental health disorder that is characterized by recurrent depressive episodes – a period where someone feels extremely down. To fit the criteria, these episodes must negatively affect the lifestyle and behavior of the diagnosed person.

Some mothers experience “baby blues” after childbirth, where they feel lots of emotions, but pronounced anxiety and worry. This may last for one or two weeks after childbirth.

However, other mothers experience longer depression that lasts up to one year after childbirth, this is called postpartum depression. The symptoms can be very severe and it can turn into a major depressive disorder if not treated.

People with this kind of depression experience constant loss of interest and excitement. The symptoms may last for months affecting the lifestyle and behavior of the diagnosed person. It might affect their sleep habits, thinking, and relationship with people.

It is not as severe as major depression but it is constant and could go on for years. PDD symptoms may occur often and last for at least 2 years.

This kind of depression is associated with seasons and climate. The person experiences depressive episodes only during certain times of the year. It is mostly during winter or fall when there is less sunlight.

This depression occurs before a woman’s menstrual cycle. It is a form of premenstrual syndrome, where the woman experiences physical and behavioral symptoms of depression.
Psychotic Depression
Psychotic depression involves severe depressive symptoms and comes with hallucinations and delusions. This is a very severe form of depression and might require hospitalization.

The foremost symptom of depression is feeling sad and that’s why some people mistake slight sadness or appropriate grief for depression. Someone diagnosed with depression will feel constant sadness and emptiness. They feel like they’re incapable and undeserving of happiness.

Depression comes with a feeling of worthlessness. Someone diagnosed with depression may feel like they are nothing and that their life is meaningless.They may also feel purposeless and they are just living a burdensome life.

Lack of Interest In Activities

Sometimes, a person with depression may lose interest in activities that they used to find pleasure in. This condition is known as anhedonia. They become easily bored and turn down offers to hang out with their friends and family, resulting in further isolation and sometimes deeper depression.

Research has shown that some people with depression, especially males, are easily irritated and angry. They get angry at things that they would normally laugh off.Some other symptoms of depression like lack of sleep and energy can also trigger irritability and anger.

Someone with depression may experience a lack of energy and tiredness. They will feel tired even when they just get up from bed in the morning.

People with depression might find it hard to concentrate because of the many thoughts going on in their heads. For example, they might be facing someone talking to them but they won’t know what the person is saying because their mind is on other things.

Depression also makes people lose their appetite. They don’t have an interest in eating anything and even if they do, they only eat very small portions of food. This can lead to extreme weight loss.

Sometimes, people with depression have suicidal thoughts. These thoughts are triggered by feelings of worthlessness and hopelessness.

They may feel their existence doesn’t make any difference and thus, they should end it. Although they might not attempt to commit suicide, the thought will keep ringing in their head as the best resort to end their pains.

Depression is a mental illness that can affect physical and emotional well-being. But it can be treated and corrected with therapy. Ketamine infusion therapy is an effective way to treat treatment-resistant depression. Unlike antidepressant medications that take up to 4 weeks before results start showing, the effect of ketamine therapy will be felt within hours of treatment. The patient will feel the depression symptoms relieving them rapidly.

What To Say To Someone With Anxiety?

What Is Bipolar Disorder?

Is Suicidal Ideation A Mental Illness?

Send Us A Message